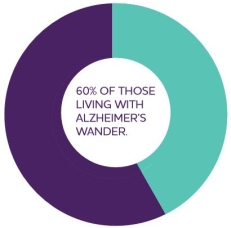 COLUMBUS, OH- New proposed legislation to train peace officers and medical service personnel on how to identify and communicate with those displaying symptoms of Alzheimer’s or dementia will prepare safety forces on how to help those who wander.

On Dec. 9, State Representatives Phil Plummer (R-Dayton) and Thomas West (D-Canton) introduced a bill that would establish training requirements for first responders on how to identify and interact with individuals with dementia.  As Alzheimer’s disease, which is the most common form of dementia, progresses, an individual will experience many symptoms including depression, anger, agitation, hallucinations and wandering.

The bill would require at least two hours of instruction for cadets with satisfactory completion of basic training at an approved peace officer training school. Plummer said, “those who are suffering with dementia deserve to have trained professionals looking out for them and working with them at all times.”

The training would focus on seven components:

“This legislation is a great next step on the heels of Governor Mike DeWine signing Senate Bill 24, which established an Alzheimer’s State Task Force,” Addison added. “We are grateful Representatives Plummer and West are taking the lead on getting this important process underway.”

Ohio is on the brink of a demographic shift where seniors will outnumber those 18 and younger. The 220,000 people living with Alzheimer’s and dementia are expected to grow by more than 20 percent in the next five years.

Rep. West said, “Making sure that our peace officers and first responders are equipped to identify and effectively interact with Ohioans with dementia is crucial. Our bill would ensure that they receive the necessary training to handle these situations and ensure the safety of our loved ones with this disease.”

About the Alzheimer’s Association:

The Alzheimer’s Association is the world’s leading voluntary health organization in Alzheimer care, support and research. Our mission is to eliminate Alzheimer’s disease through the advancement of research; to provide and enhance care and support for all affected; and to reduce the risk of dementia through the promotion of brain health. Our vision is a world without Alzheimer’s. For more information, visit www.alz.org.